Electrical codes are designed to keep people and buildings safe from the dangers that electrical currents can pose, like electrocution and fire. Unfortunately, there is no one set of rules when it comes to electrical codes. A veritable patchwork of electrical codes exist across the United States. Much has been done to standardize various building codes—including electrical codes—in the past few decades, but because different regions have different climates, weather patterns, and citizen attitudes, there is still quite a bit of variation.

Businesses and sometimes even residences must comply with all the regulations that govern electrical wiring and power delivery in their location, whether the source of the regulation is local ordinance, state law, or a federal agency (like OSHA).

Some requirements are fairly universal, like a requirement that electrical devices be certified by Underwriter’s Laboratories (UL) or another independent certification lab.

The National Fire Protection Association (NFPA) established the National Electrical Code (NEC) as a standard for electrical safety in residential, commercial, and industrial buildings. As the national benchmark for the safe installation of electrical wiring and equipment, the American National Standards Institute (ANSI) also recognizes the NEC. This makes it the primary electrical code used in the United States, but it’s adoption has not been universal (see map).

The most recent revision of the NEC is the 2020 edition. States and local municipalities determine which edition of the NEC they are going to use and if they are going to be more or less restrictive. The NEC comes out with a new edition every 3 years. Some areas use the brand new 2020 edition, but many areas still use an older edition of the code, from as early as 2008, and some municipalities use a variance of the national code.

The CE Code is very similar to the NEC and is used throughout Canada. Provinces and municipalities determine what edition of the CE Code they are going to use and some minor modifications may exist. None of the modifications are known to impact iMovR desktop power products.

The CE Code requires that products be tested and labeled by a certified test lab to appropriate Canadian Standards Association requirements. 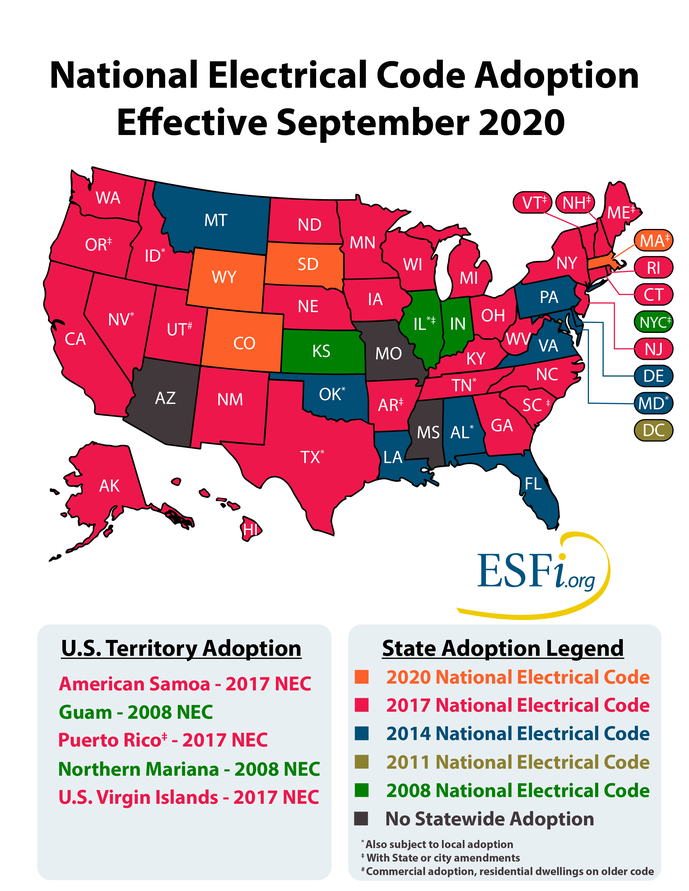 Finally, while a minority of states prohibit local governments from changing or adding to statewide building and electrical codes, in most of the U.S., municipalities are free to enact their own regulations. Some notable city regulations that impact the use of iMovR's desktop power options are below.

Listed Furniture Power Distribution Units (FPDU’s) are UL or ETL Listed cord and plug accessories. These include all our products with a standard 15A plug, Listed Interlink, Listed Interlink iQ, and Twine. Listed FPDU’s can be used in the city of Chicago as long as they are installed on Listed freestanding furniture that can be repositioned by users. This Includes tables with built-in casters. The maximum cord length is 9 feet.

As of 2009, NYC allows the use of Relocatable Power Taps and Furniture Power Distribution Units in office environments.

This is a more restrictive code that potentially impacts iMovR's desktop power options. Municipalities that follow this code require that a circuit breaker be a part of every Relocatable Power Tap (RPT) or Furniture Power Distribution Unit (FPDU). Known municipalities that follow this code currently are Los Angeles, CA; San Francisco, CA; and Charlotte, NC. The application of this code has been sporadic, but users still need to be aware of this requirement.

The NEC requires that products be tested and labeled by a certified test lab to NEC requirements.

Nationally Recognized Testing Laboratories (NRTLs), are a 3rd-party companies like UL or Intertek that are authorized to test to the codes/standards. If a product passes their test, they can apply their certification mark. These marks come in two types: Listed and Recognized.

These products are considered safe to use on their own (when correctly installed) and do not need anything else to provide protection or safety. All the desktop power options sold here at iMovR fall into this category.

While most of the requirements in all the various electrical codes pertain to the construction and maintenance of your building’s electrical systems, there are still plenty that apply to power management and delivery devices. Keeping all those regulations straight can be difficult, which is why our electrical experts and engineers have already taken care of it. Every power management device from iMovR has been designed with these regulations in mind, and are compliant everywhere in the United States. Whether you’re looking to outfit a single office or multiple sites across the nation, iMovR power management is there to serve your desktop power needs.