The Jaxson Electric Standing Desk Base begins shipping mid-July. Some accessories may arrive sooner than the base.

Skip to the end of the images gallery 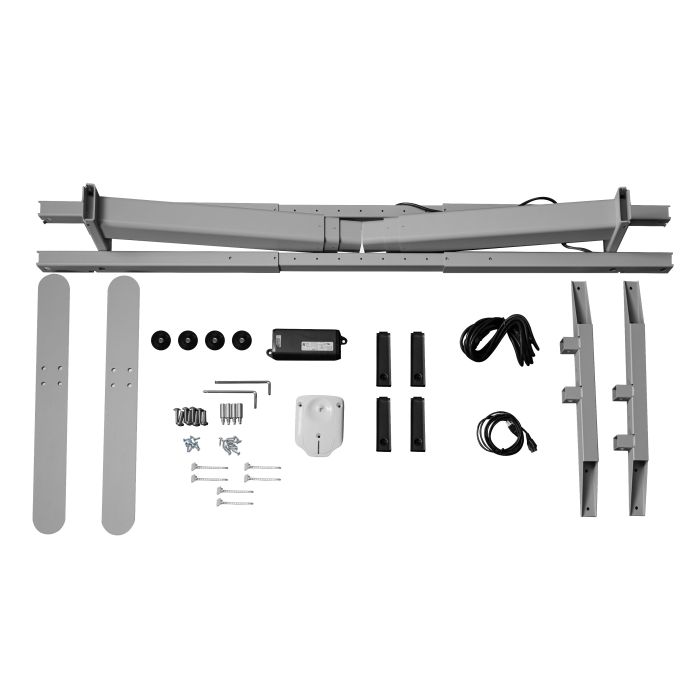 Skip to the beginning of the images gallery

The first new motor technology introduced since the invention of the electric standing desk in 1998.

In another notable industry innovation first, iMovR’s new Jaxson Desk is the first ever created using next-generation brushless motor technology. And it's a game changer.

Brushless motors have been around for years in industrial applications, but the sophisticated controllers they require were too expensive to use in a cost-sensitive product like a standing desk. But like all things electronic, it was only a matter of time before this problem was licked. And now iMovR has once again moved the goal posts on standing desk price/performance.

Learn all about the specific advantages of brushless motor technology.

Finally available to the DIY customer who wants to put their own desktop on, the Jaxson base is priced only slightly higher than the most popular, commodity-grade base frames that are manufactured in China. It has created an entirely new tier in between low-end imports and super-premium American-made bases (like our Lander and Lander Lite bases.) One of unprecedented consumer value. 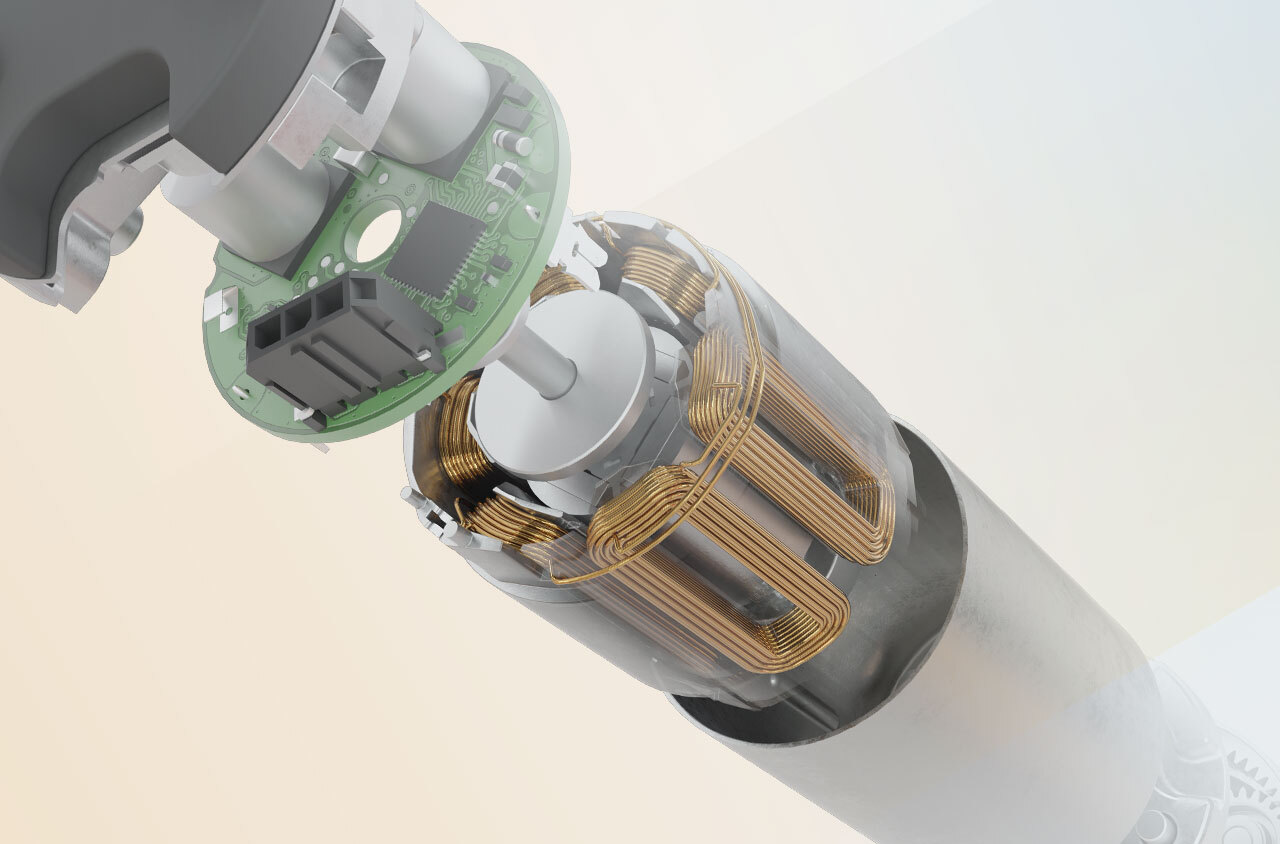 With several years of R&D invested in creating the Jaxson line, our primary goal was simple: to give American consumers and businesses a way to ditch their dependency on cheap goods from Asia (99% of standing desks sold online are built in China, with the cheapest possible components), yet without breaking the bank.

And now thanks to the evolution of brushless motors, we’ve met that challenge.

Our technology goal was to redefine the state-of-the-art in the mainstream standing desk market. We added Bluetooth and a smartphone health coaching app, just as iMovR was the first to introduce to the market with our Lander desks in 2018. We also added an infrared presence sensor to make the desk accurately aware of when you’ve stepped away or returned to your workstation. There’s even an NFC reader in the handset for future applications on the corporate campus.

So packed with tech advancements it’s the most future-proof desk we’ve ever designed.

Our design goal was to entirely reshape the standing desk so that it would look as appropriate in a home office environment as on the corporate campus. Gone are all the hard 90-degree angles, replaced with smoothly chamfered square columns and a gorgeously streamlined controller handset. Warmer colors on the metal frame transform the Jaxson from mere office furniture into a beautiful decor element of any room.

Never has a standing desk had less of an industrial aesthetic.

Our customer experience goal was to make assembly as fun and fast as possible. No one wants to spend an hour on the floor with a toolbox building an “IKEA project.” While Jaxson desks are not factory pre-assembled to the same degree as our super-premium Lander desks, they’re way easier to put together than commodity desks from China. 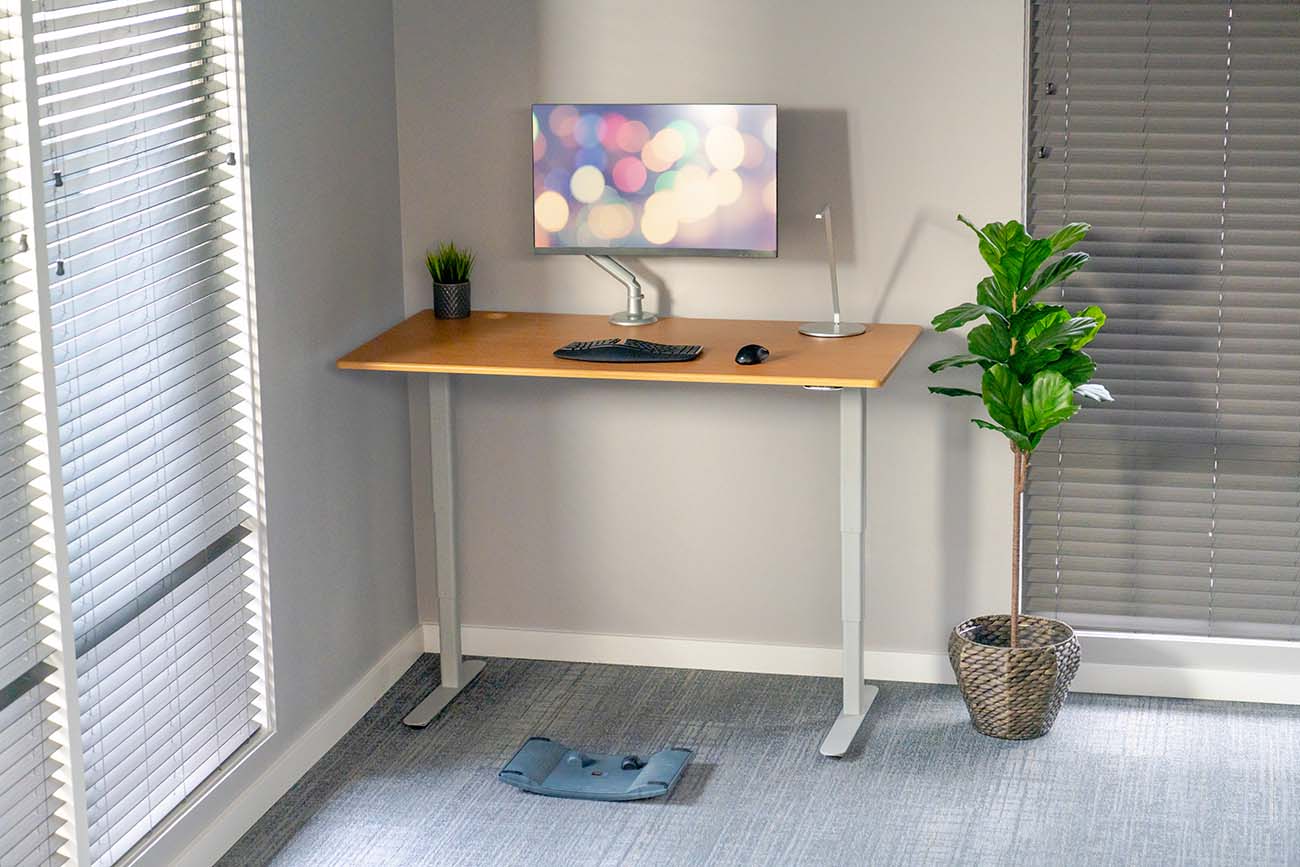 Let’s be honest. Earlier generations of standing desks were designed by engineers, without a lot of input from furniture designers. They worked well mechanically, but they had a lot of hard edges to them. And while they may have looked just fine in a cubicle farm built entirely with 90-degree steel corners, when the pandemic hit and millions of people started working from home, many found that conventional standing desks just didn’t fit in as nicely with all their other home furnishings.

The Jaxson was designed from the ground up to blend in better, in any room. We got rid of the hard angles that make a desk look like industrial equipment, and made every edge rounder and softer. For example, the lifting columns have a unique chamfered square profile you won’t find on any other standing desk. The sleek handset is almost “aerodynamically contoured,” not a utilitarian switch panel.

We also powder coated all the metal parts with warmer versions of the cold black, white and silver that are offered on traditional standing desks. The Basalt Black has brown undertones, the Alabaster White has cream undertones, and the Starlight Silver shimmers with a starlight pattern at certain light angles. 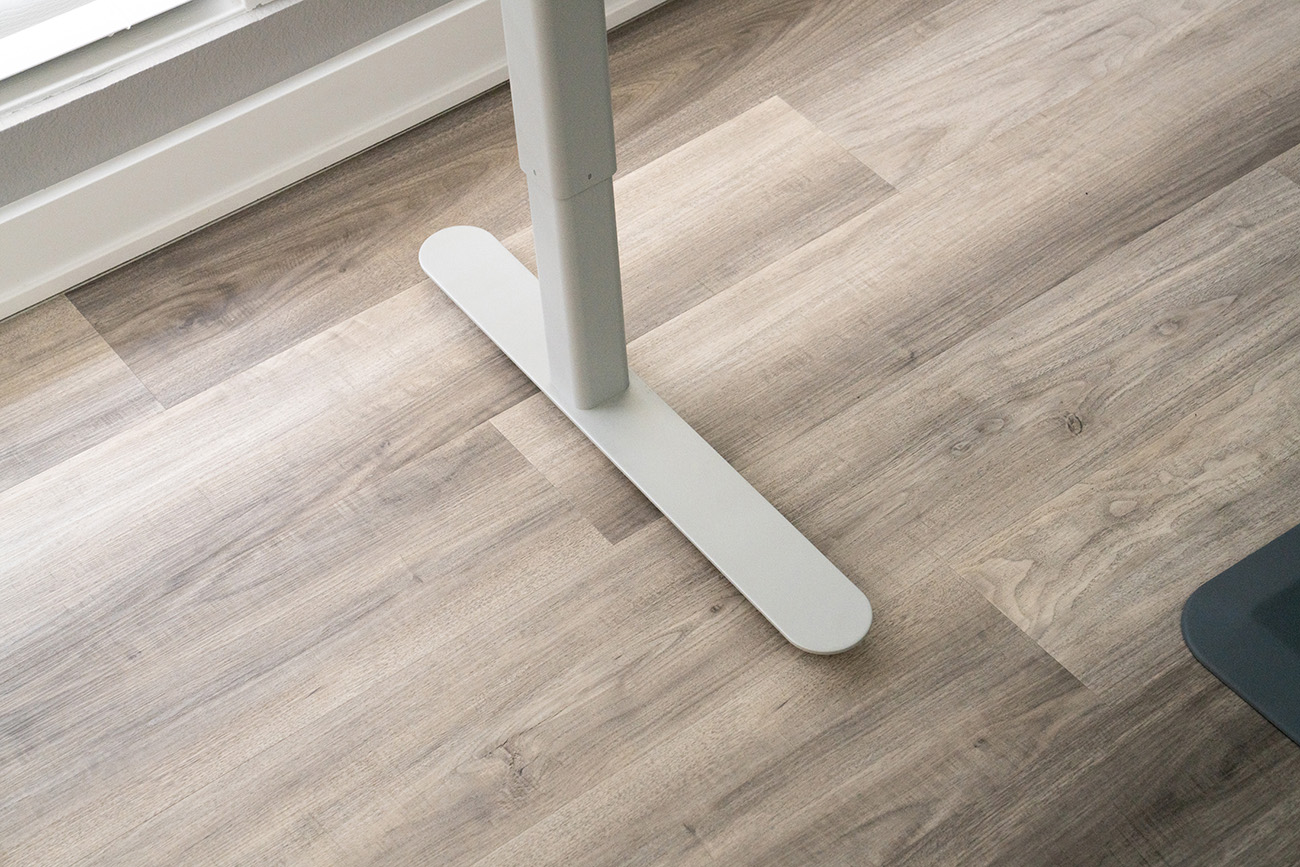 The beautifully-contoured Jaxson handset isn’t just hanging off the front edge of the desktop like the switch panel on a piece of industrial equipment. With its up/down buttons recessed below, the handset only minimally protrudes into view from underneath the desktop.

While the design is certainly sleek and “aerodynamic,” it’s even more impressive on the inside. No other standing desk controller has Bluetooth, NFC, and an infra-red presence sensor built-in.

These electronics are designed to work with iMovR’s Jaxson Desk Control app (iOS and Android) to enable precise, yet non-disruptive, continuous measurement of your sitting versus standing time—the key inputs to the app’s built-in health coach. Rather than measuring “the health of the desk,” the infrared sensor ensures that only the user’s presence and position are being recorded.

The app ubiquitously records your use of the workstation throughout the day and keeps track of your actual daily standing time versus your set goals. Gentle reminders are pushed to your phone when your personally-set maximum sitting time thresholds have been reached, to remind you to change position. This seemingly simple feature has been shown to lead to a 117% increase in standing time for average users. 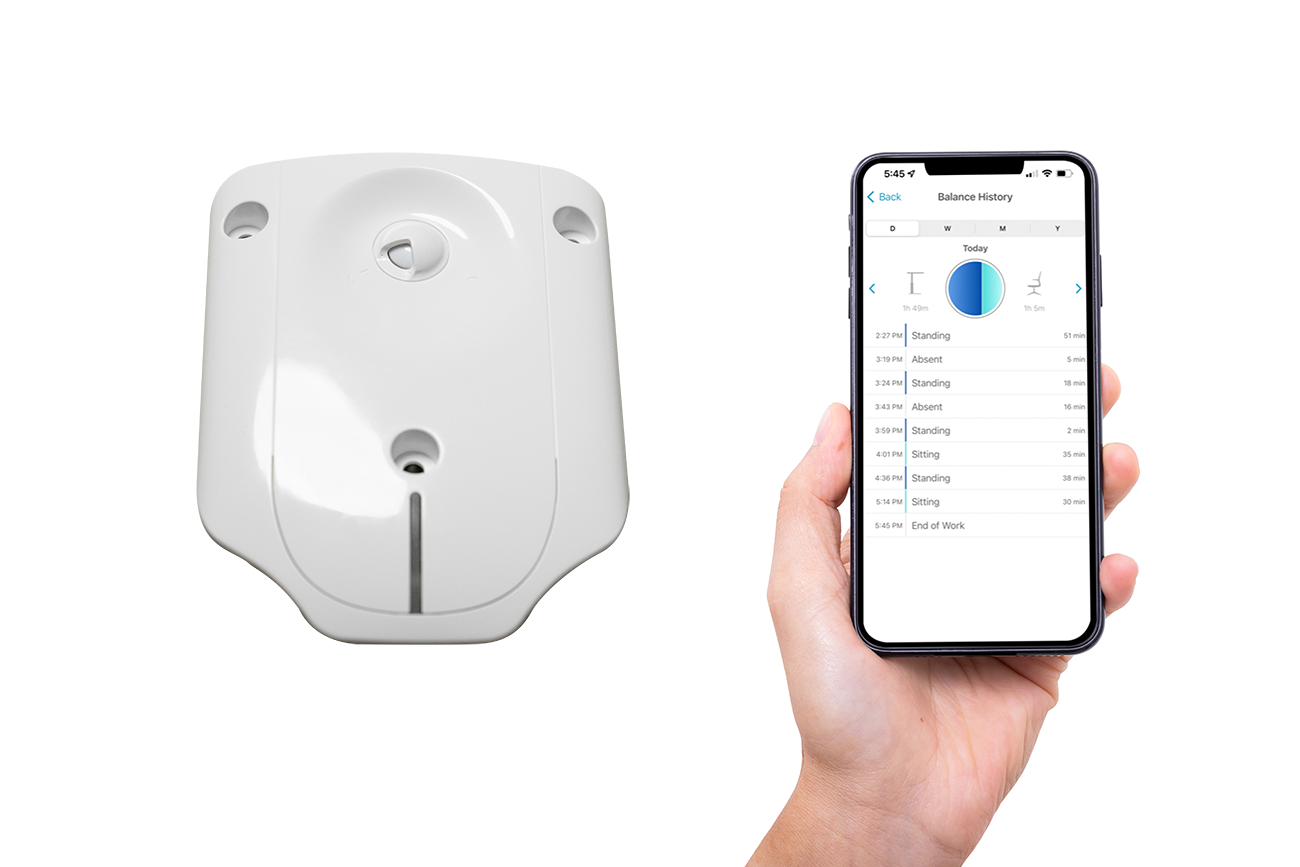 As with all our standing desks, iMovR pays more attention to the user experience than other desk makers do, starting with the assembly process. Watch the video to see just how easy it is for an average person to put their new Jaxson desk together in around 15 minutes. Or download the full-size, full-color installation guide that comes with the desk. Building a Jaxson desk is the very antithesis of tackling an “IKEA project.”

Most components are already factory pre-assembled to make the job as easy as possible. Once you’ve pre-drilled your desktop that entire base assembles to it in around 15 minutes.

Brushless motors are a game changer in standing desk reliability, especially for one in this price range. This permits us to back the Jaxson with the same 15-year warranty as we have on our super-premium Lander and Lander Lite bases.

We know that some of our competitors have tried matching our 15-year warranties on their commodity-grade Chinese-made standing desks, and that’s a fine business decision for them to make. But for you, the user, it’s a question of the hassle factor when a component fails. No one wants to have their workstation disrupted by a premature failure and the burdensome disassembly, exchange of parts, and re-assembly often weeks later. iMovR’s warranties are predicated on our relentless pursuit of quality and robust quality assurance testing of every single desk we ship. 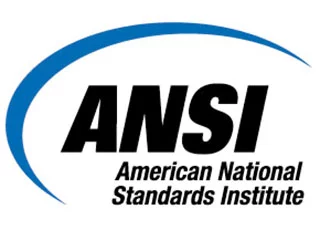 The Gold Standard for manufacturing quality in office products is ANSI/BIFMA Certification. The BIFMA X5.5-2014 standard is relied upon by institutional and government furniture buyers to guarantee that the performance, reliability and durability of the product meets the very highest standards. This iMovR desk has been independently certified by Intertek Laboratories and shown to surpass all applicable tests with flying colors. Learn more.

Customize your Jaxson Base Now

Choose your base size:

For medium-stature users, the single-stage base is like most standing desks in the market and is the lowest cost option. For very short or very tall users, or for compliance with ANSI/BIFMA G1-2013 Ergonomic Guidelines (especially for corporate and government buyers), the dual-stage base has a 26.1” total stroke to accommodate nearly every conceivable user.

iMovR also uniquely offers 6” leg extenders on all our custom desks, recommended for users who have an under-desk treadmill, are extremely tall individuals, or for those who just seek the maximum desk stability at higher heights. High-quality, non-marring, and lockable caster wheels are also offered on the Jaxson (these also enhance the stability of the desk by raising the bottom tubes, and can be combined with the 6” height extenders).

Choose your base color: 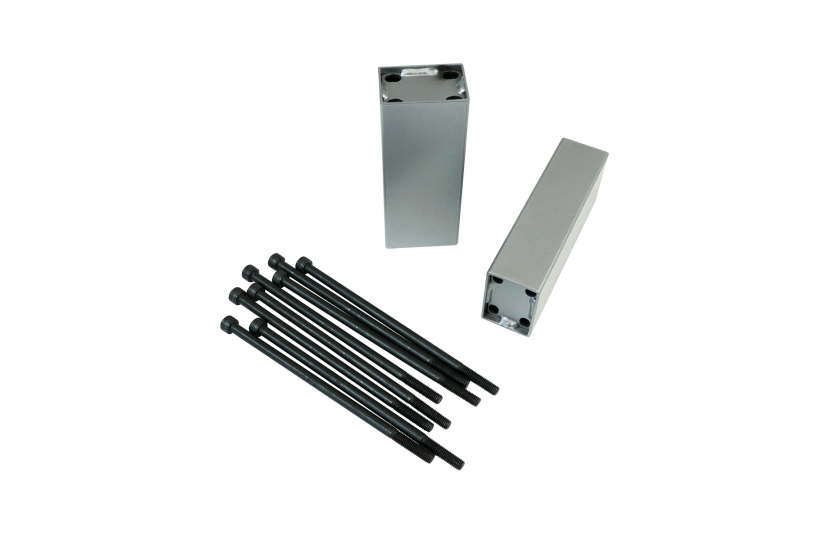 The Jaxson base already has an impressive height range, but now you can add even 6" to the top height level. Height extenders are perfect for taller workers, and especially when using a treadmill desk.

Please contact our Corporate Solutions Department to discuss custom color and logo engraving options, as well as installation details and large quantity discounts at (888) 208-6770  ext. 3 or email us at corporatesolutions@imovr.com.

Just a Small Sample of Customers Who Use iMovR Standing Desks 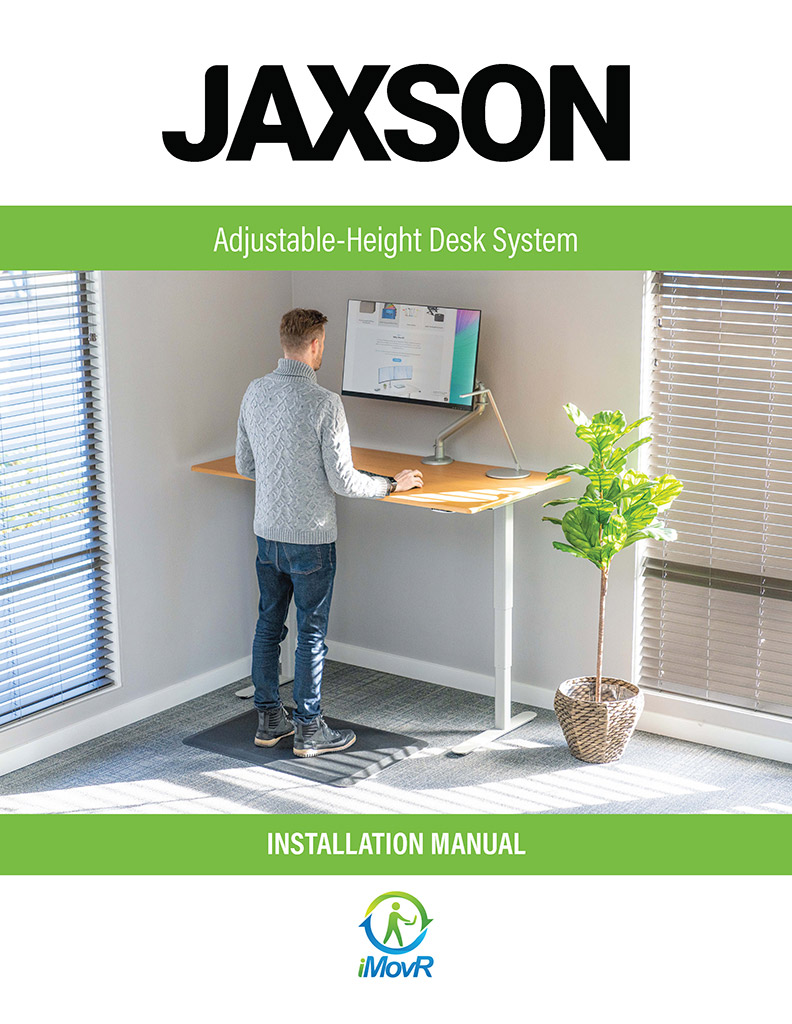 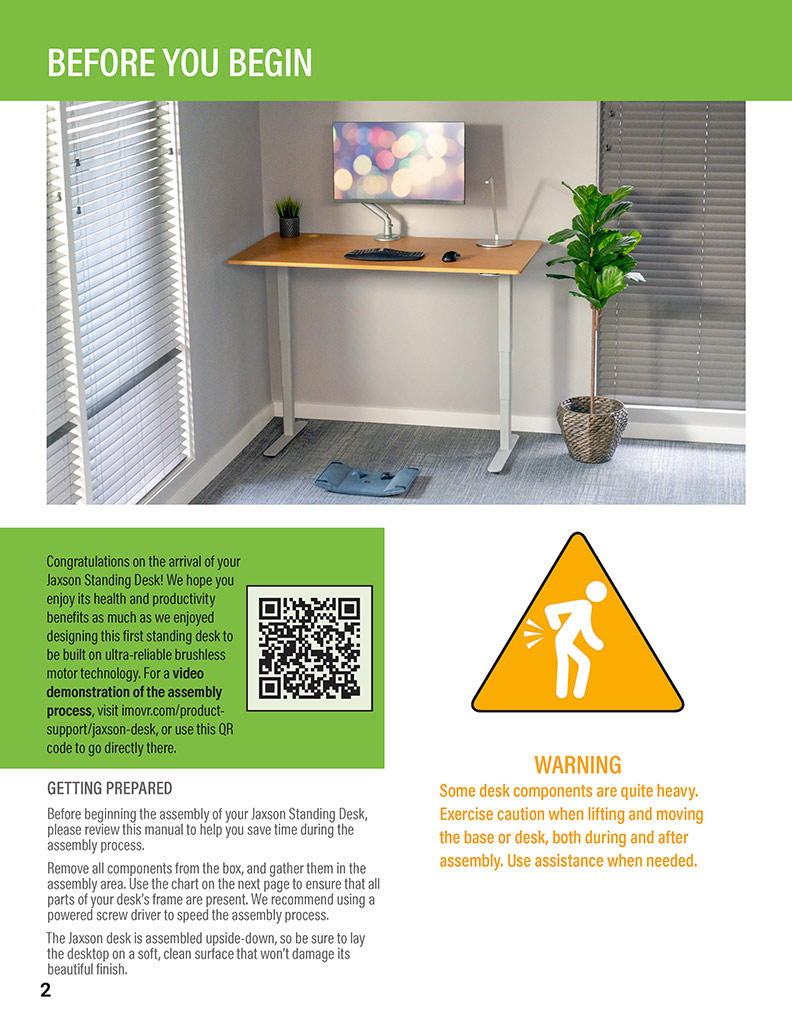 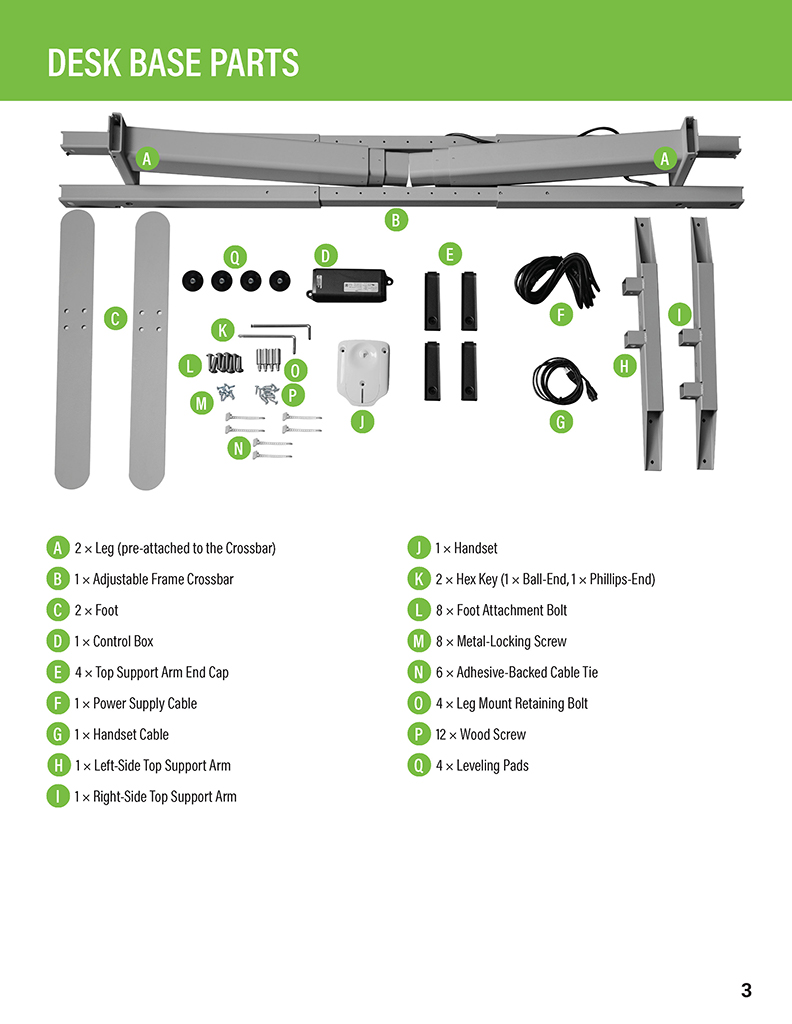 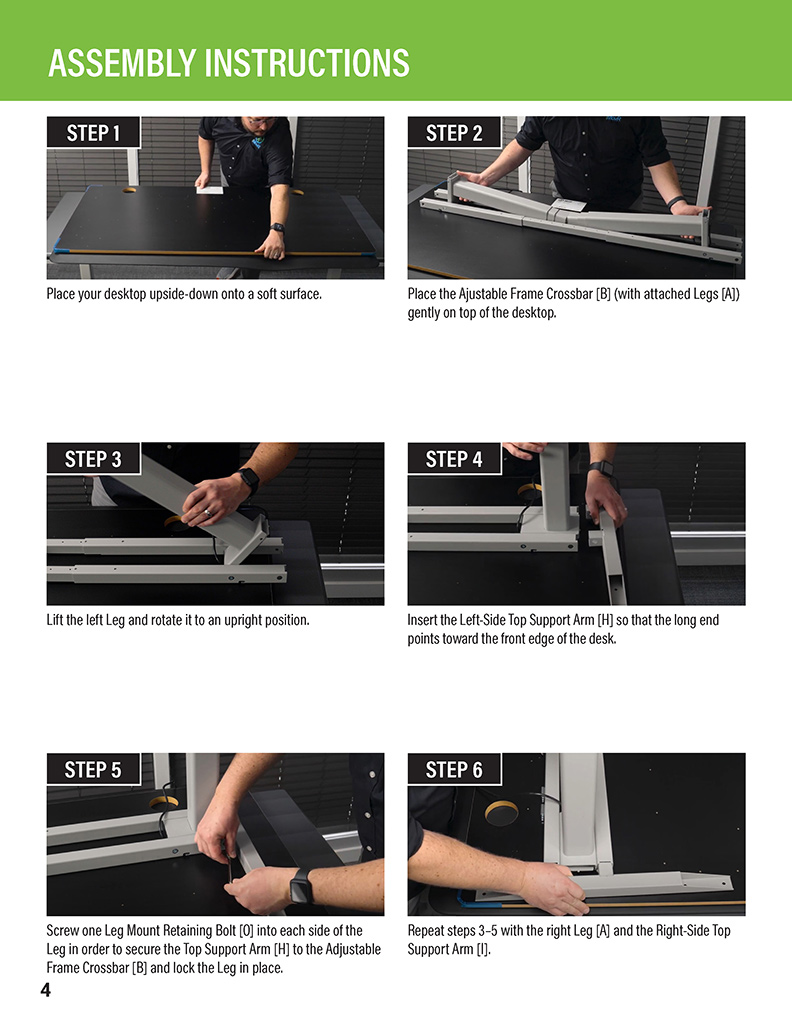 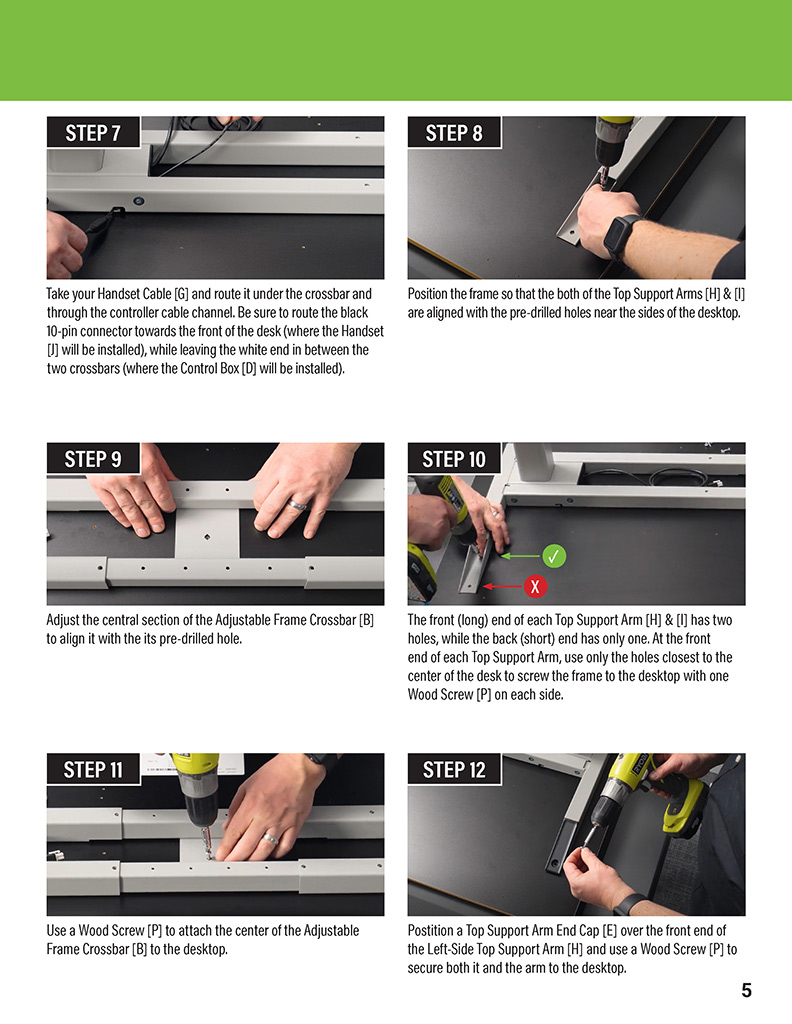 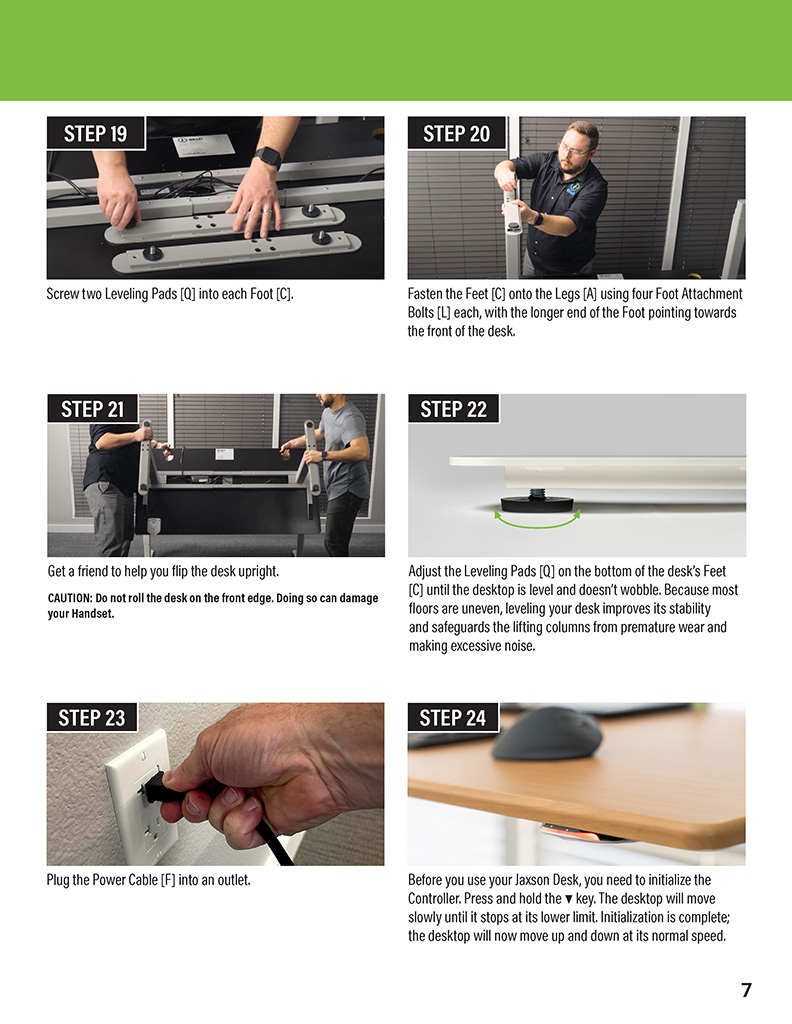 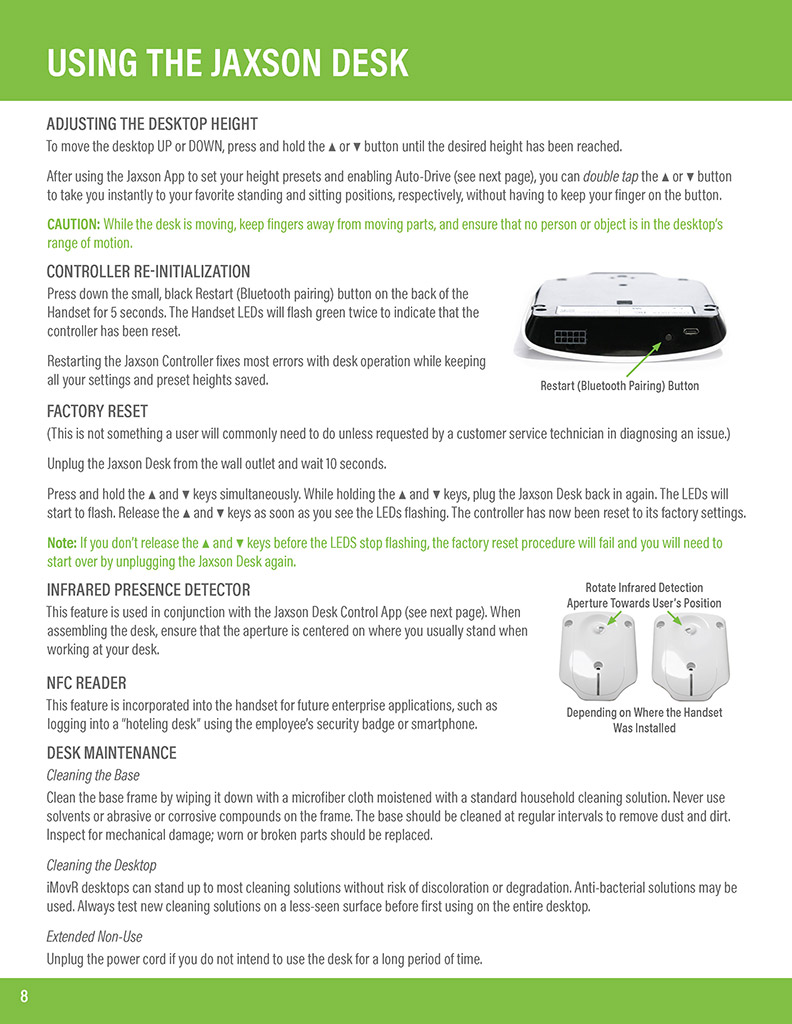 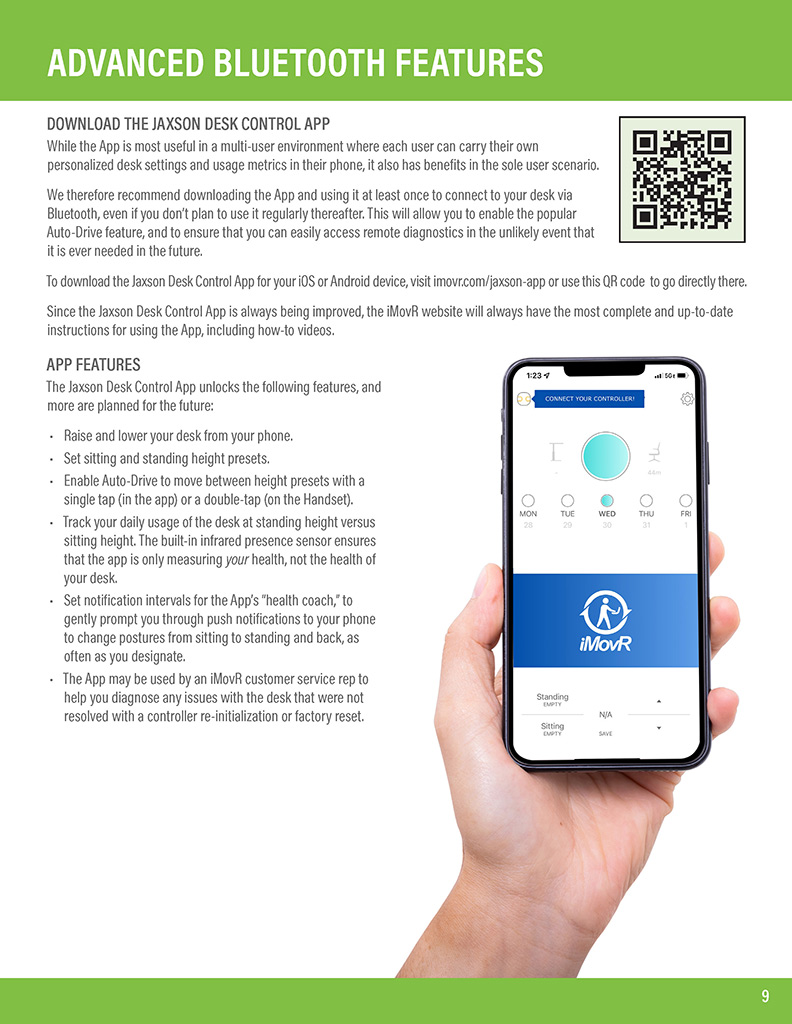 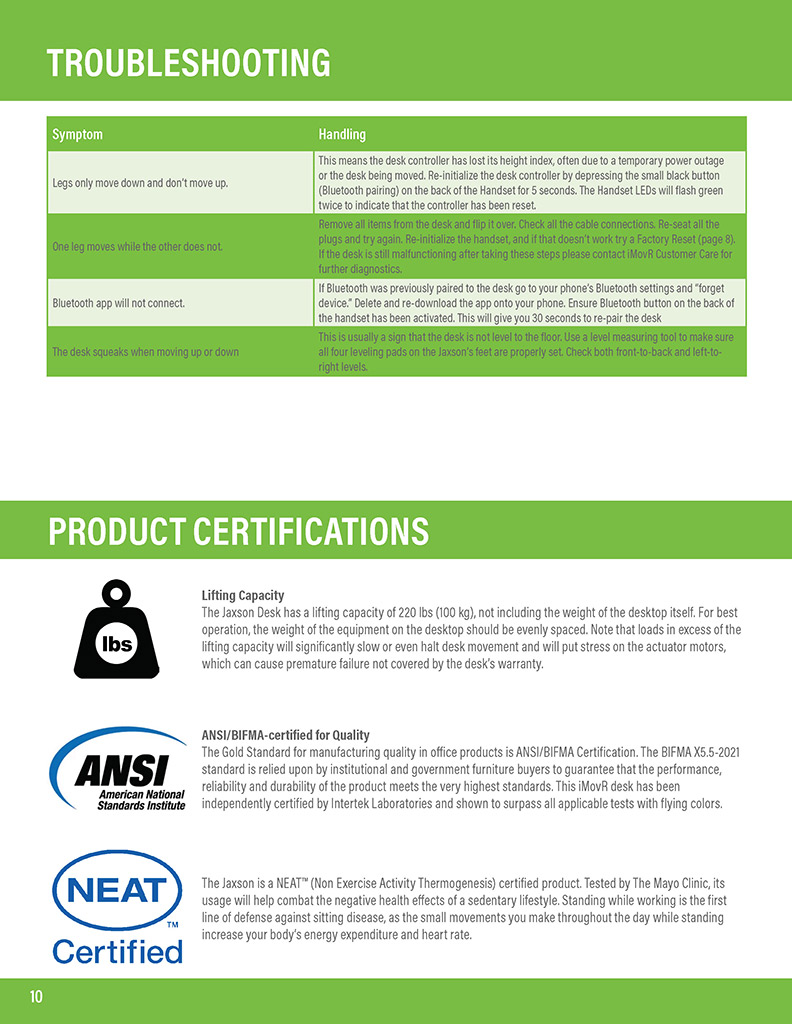 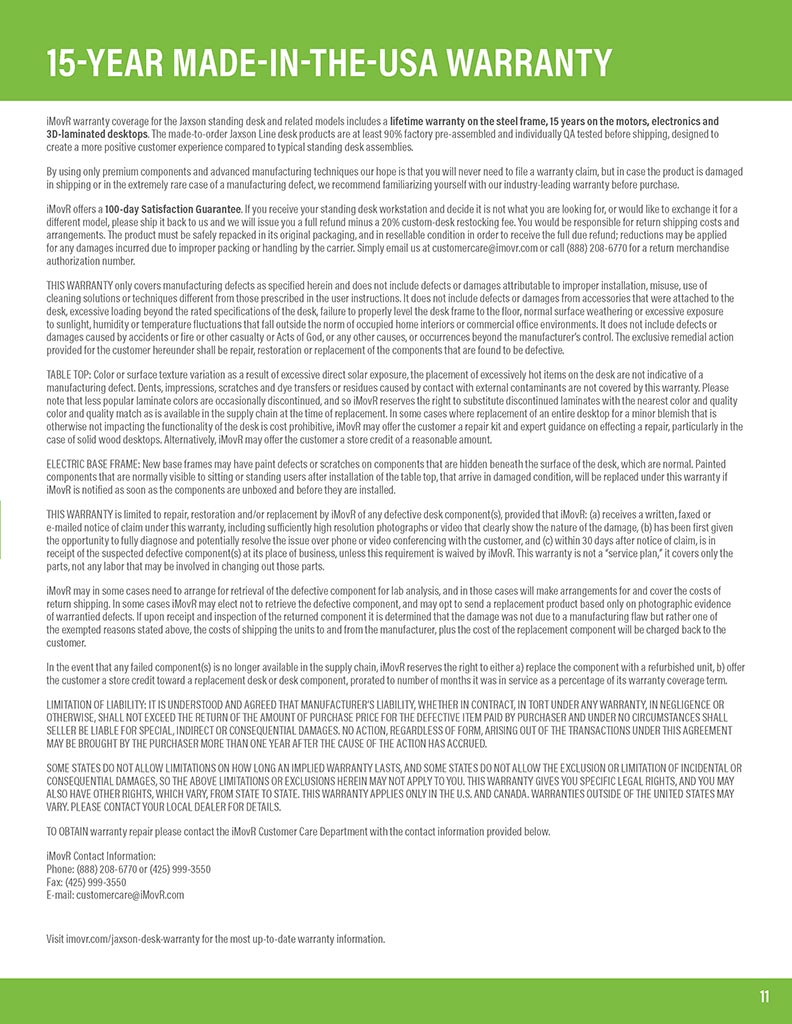 This DIY desk base comes with our Made-in-the-USA Warranty:

We have a 100-day, 100% Satisfaction Guarantee. If you receive your iMovR product and decide it is not what you are looking for, or would like to exchange it, please send it back and we will give you a full refund. For height-adjustable desks, filing cabinets, premium drawers, treadmills, ergonomic chairs and stools and DIY bases, you will receive a full refund of your purchase price minus a 20% restocking fee. The customer is responsible for shipping and handling costs of the return. The product must be in its original packaging, and in sellable condition. Please note that shipping and handling costs are non-refundable.

This product ships FREE to the lower 48 States.

See our Shipping and Delivery Upgrade Options for complete details about our shipping service levels, methods of shipment, and options for other locations.

Write Your Own Review
© 2022 iMovR. All Rights Reserved.