How Much Time Do Standing Desk Users Actually Stand at Their Desks?

This is a topic challenging many customers who are thinking of adopting sit-stand desks, and even those who are already using them. Many standing desk users, despite their initial enthusiasm, find they often forget to switch to standing position often enough and wind up spending more time being sedentary than they aimed for.

In this article, we examine real-world usage statistics and explore some simple measures that you and your organization can employ to healthfully maximize standing time each day.

Standing desk adoption and usage statistics vary widely by company, industry, geography and many other factors. Company culture is a key driver. While some employers have effectively socialized the idea of working at an active workstation—particularly in industries like tech, healthcare, law and finance (where the health, job satisfaction and productivity of their most highly compensated workers is of paramount concern)—other organizations have seen spotty results. It’s not all that uncommon to see every single sit-stand desk in an open office area resting at their sitting heights, no employee wanting to “stand out from the crowd.”

Another factor in adoption and usage rates is how well employees manage to their personal goals for standing time. KL.7, a Copenhagen-based behavioral design firm, recently conducted a study in which they monitored 54 office workers, collecting data on over 9,100 observations and 4,500 hours of sit-stand activity. During this time, two types of actions were tested at three different workplaces using email reminders and physical or auditory reminders. Office workers either received an email with new content each day at different times or a reminder was placed on their desk for them to feel and hear once every hour.

So, just by employing these gentle reminders, workers who were underutilizing their standing desks saw an over 117% increase in standing time.

For those that were considered light users, i.e. that typically stood at their desks less than 20% of the time, their standing time increased from 36 minutes per day to 79 minutes per day. So, just by employing these gentle reminders, workers who were underutilizing their standing desks saw an over 117% increase in standing time. That's a phenomenal start towards ensuring that employees see the health and performance benefits of their sit-stand desks.

Surprisingly, we hear of many organizations where fleets of standing desks have been deployed en masse only to see a very low percentage of employees use them routinely. Our own survey of enterprise employers indicates these top three reasons for lack of full adoption:

Finding the Right Balance between Sitting and Standing

Every once in a while, we see a very misleading report circulating in social media claiming that standing desks are bad for your health. One recent study showed that if you stand for extended periods of time, it can lead to negative effects like discomfort and mental sluggishness. But we know that sedentary behavior can have severe effects as well, and 99 out of 100 studies conducted by respected research institutions around the world will bear this out.

In truth life is not so binary—it's not just about doing one versus the other. The key is doing the right amount of both. Instead of focusing on sitting versus standing, businesses should be focused on creating the opportunity for movement and encouraging a more active work environment. It’s just common sense.

It’s not enough to just help people remember to stand, it needs to be done in a way that doesn't distract their focus or interrupt their work, or the work of those around them. For example, the high-tech hand controller on the iMovR Lander desk was designed to shape users’ behavior in a positive way. It’s not just a panel of buttons for setting the height of the desk and memorizing your height preferences like every other desk controller out there.

When [the Lander's controller] pulses it’s time to switch back to standing. And when it turns orange, it's your signal that you’ve been sitting longer than you wanted to. 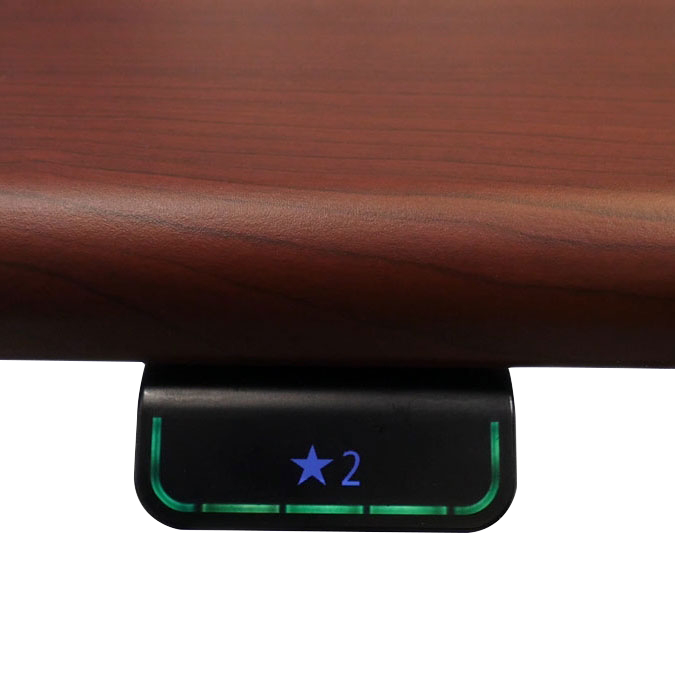 The Lander’s unique hand controller combines multiple user-friendly features, like a comfortable single-tap feature for command the desk to move automatically to the next height position, hands-free, and an unobtrusive “light rope” that changes color to help remind people to sit or stand. For example, when it's green you're either standing or sitting at the right interval. When it pulses it’s time to switch back to standing. And when it turns orange, it's your signal that you’ve been sitting longer than you wanted to.

Most importantly, it was designed around choice and personal preference. Its Bluetooth connection to your smartphone allows users to configure their preferences in a desk control app, which is a free download. Users can customize reminders to get as audible push notifications on their iPhone, iPad, or Android mobile devices. We’re going to be continuously adding new software features, too, all with an eye towards unobtrusively helping users spend more time standing, and measuring their usage so they can manage to their personal goals, and share data with other health tracking applications.

At the end of the day…

The many published studies on this subject show that when employees use their standing desks more, they're better employees. They have reduced sick days, they're more focused, they're more productive, and they're less stressed. According to Dr. James Levine, Obesity Chair of the Mayo Clinic, the return on investment is typically between $3 and $7 for every $1 invested in workplace interventions that help people be more active on their jobs. The more standing time that companies can encourage out of their employees, the higher the ROI.